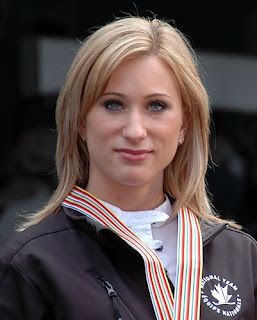 Like everyone else in America this week, I was captivated by the story of Canadian figure skater Joannie Rochette. Just a few hours after Rochette's 55-year-old mother arrived in Vancouver to watch her daughter skate in the Winter Olympics, she died from a sudden and massive heart attack.

And her daughter continued to compete.

Some people may find this disconcerting, even heartless, but I found it enormously brave. We can only imagine the kind of focus and control it must have taken for Rochette to keep it together long enough to perform the short and long programs she'd been practicing for months. We saw the tears she couldn't contain at the end of the short program, and those of us who've lost mothers, especially suddenly, empathized with her unique pain. Was there any motherless daughter watching who didn't think, "Oh, sweetheart! What can we do to help you through?"

Elite athletes are trained to shut off all emotion and thoughts when it's their turn to perform, and to focus only on the task at hand, but this was another kind of compartmentalization entirely. That Rochette was able to come through at the level she did, and capture a bronze medal for Canada, is true testimony to determination, love, and faith in her own ability to come through.

In an television interview that aired last night, she mentioned that as hard as it was, and as much as she wanted to be with her family, she'd made the decision to stay in Vancouver and compete because that's what her mother would have wanted. On the one hand, that sounded like exactly the kind of answer she would have been coached to give when that question was inevitably asked. On the other hand, you can't help thinking it was probably true. Or feeling that the greatest tragedy of all in this story is the mother who never got to see her daughter skate, and know what she was capable of achieving under such extraordinary pressure. Although very likely, she already knew.

Tears...your comment brought tears. As soon as I saw the picture I knew I was in for it. It was hard for me to watch this girl's story. I had to bite my lip every time the sports casters 'went there'. I can imagine she will be allowing herself some tears this week, as she has time to reflect on all she has lost and all she has won this week. I absolutely was sending out hugs to her in my mind as she took to the ice every time. Thanks for taking the lead and writing this post...way to represent. :)

It's difficult for people to understand what athletes are capable of doing when they are committed. Shutting off all emotion and thoughts as you say is what enables us to push through and perform. This other type of compartmentalizing as you say is what she had to do to get through. I feel for her.Thank you for writing this blog.