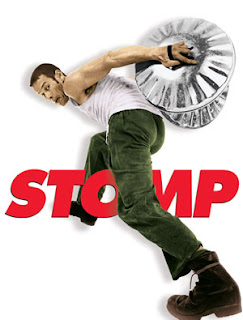 Took the girls to see Stomp on Tuesday night--the street percussion troupe that makes music out of every ordinary object known to mankind. Sheesh, they were good. We don't typically do things like this on a school night, Hollywood being a solid 45 minute drive from the house without traffic, but I lucked into half-price tickets that were available only midweek so figured, Just this once: why not? And to make it even extra special, since we got there a half hour early, we made a Pinkberry run before the show.

How is it possible that I've lived in LA this long and never been to a Pinkberry? If you live near a Pinkberry, run--do not walk--for an original vanilla with chocolate chips and peppermint shavings. Oh. My. God.

Anyway: Stomp. It's one of those shows that makes you sit in the audience alternately thinking, How do they do that? and We've got to try this at home. Whole percussive routines using only brooms. Folding chairs. Water-cooler bottles. Those dancers were seriously inventive. Incredibly talented, too. And they did an encore that encouraged audience participation to a rhythmic degree far beyond what you'd think a thousand people could manage--yet did.

In the car on the way to Hollywood, I was telling the girls about how I've seen Stomp twice before, the first time at the Edinburgh Fringe Festival in 1991 when they were still a scruffy bunch from Brighton and no one knew who they were. I was visiting my friend Sharon who was studying in England that summer, and we roadtripped up to Scotland with some of her friends for the festival. We wound up at Stomp because it was one of the few events that still had last-minute tickets available. I'm guessing most of the audience was there for the same reason, because nobody seemed to know what they were in for when the performers started doing their thing. If I'm remembering right, they opened with brooms back then, too, and also did routines with matchbooks, plastic bags, trash cans, and keys. It was fantastic and innovative and wholly new. Or at least that's how it seemed. After the show, the audience poured into the streets of Edinburgh and took off kicking trash cans and drumming against the sides of buildings. The most mundane objects suddenly looked like instruments, worthy of making music on the street.

Reading the show's program Tuesday night, I realized that the Fringe Festival performance had been Stomp's debut. Who knew? I guess those of us in the audience did, at some level, because of the electricity it inspired, the freshness it embodied. About five years later, after Stomp was already ensconced off-Broadway in the East Village, I saw them again and even though the U.S. troupe was equally as talented and the routines even more astonishing, the newness had worn off. The amazement of first contact was gone, replaced by the awe of their performance skills.

It's still an incredible show nonetheless. My kids loved it. It's playing at the Pantages Theater through Feb. 7. In lieu of driving to Hollywood on a school night, you can watch a short clip here.

Oh! I just noticed I'm on your blog list! THANK YOU!

I need to take my son to this! He's a natural STOMPER himself!