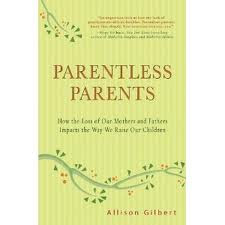 Anyone who's lost a parent knows how that hole in the family grows even larger after a child is born. Now it's not just a parent who's missing from the equation, it's a grandparent as well.

What about when of both your parents are gone before your children come along? That's the topic of Allison Gilbert's new book, Parentless Parents, a careful and documented examination of the particular issues these parents face.

Gilbert, who mI've known since 2005 when she was working on her collection of interviews with adult orphans, Always Too Soon, was kind enough to take time out of her book-promotion schedule to answer a few questions about Parentless Parents for readers of 455-Girls:

455G: You lost your mother at age 25--before you married and had your children-- and your father when you were 31 and your son was eighteen months old. What were those intervening years like for you?

AG: I had feared becoming a parentless parent long before I ever became one. Once my mother died, I clung to my father. I knew all too well he was my final parent. Because of that, and after the birth of my son, he and I became the closest we'd ever been. I involved him as often as I could -- in everything I did as an expectant mother and later, as a new mom. My dad came with me and my husband when I had ultrasounds. My father jumped at the chance to come with us to get Jake's first haircut. And, then, just like that, he developed a cough and was dead a few weeks later. My father had lung cancer and hadn't smoked in 20 years.

455G: Many women who come to this blog felt emotionally parentless after their mothers died, even if their fathers are still living. Will your book speak to them as well?

AG: In many ways, even though my father was an enormous comfort to me after my mother died, I felt at times like I was already a parentless parent. My dad was loving, but he couldn't remember all the details I really needed to know as a new mom. He couldn't remember when I started eating solid foods, or how old I was when I first slept through the night. My mom would have likely remembered though, and that's why parenting without her hurt so much, even though I had my dad.

My father also wasn't a very patient man, and he certainly wouldn't have been willing to hear me drone on and on about cribs, strollers, and color choices for our son's nursery. That kind of inexhaustible interest in my life -- even the smallest, most inconsequential tidbits -- ended for the most part when my mother passed away, and could never be fully replaced.

Ultimately, because our moms were so often the ones who listened most attentively when we were young, and because our mothers stereotypically made most of the decisions regarding our care, the pain of mother loss can feel especially sharp, sometimes just as intense as being a parentless parent.

455G: One of the biggest challenges of being parentless is being able to ask for and accept help as a new mother. I remember poring through books for advice after my first daughter was born because I felt embarrassed to go to my friends with basic questions. What practical suggestions do you have for parentless parents who are, so to speak, setting sail alone?

AG: I don't think I was ever embarrassed to ask for help; I just wasn't willing to accept all the help that was around me. In my mind, nobody could measure up to the kind of grandma I imagined my mother would have been, so I pushed nearly everyone close to me away. In particular, I resented that my mother-in-law was just so willing (and capable!) of swooping in and taking over. Ultimately, I realized that all the anger I was clinging to, all that sadness, was hurting me more than anyone else. Gradually I began to get comfortable not only with accepting help -- but also being absolutely grateful for it. This represented nothing less than a sea change in my thinking, and the process has been enormously freeing.

Emotionally, I understood that my husband and I were both very lucky to have his parents. They are active and engaged and completely loving. And as a matter of simple physical practicality, by learning to embrace help, the enormous pressure I felt being a mom without my mom began to lift. Looking back, it seems that many of the burdens that come along with new motherhood are easier to handle once you accept that no amount anger and self-pity can bring a mother back.

455G: Support groups have been enormously helpful for many motherless women because they find comfort in the presence of others who understand. You've helped to start several Parentless Parents groups. Can you tell us a little bit about what they offer?

Sure! Parentless Parents support groups are now forming all over the country. They’re developing in several states including California; Oregon; New York; Washington, DC; and Florida. The groups are run by parentless parents, and are a way for parentless parents to meet and exchange ideas, tips, and resources. These groups actually tend to be a lot of fun, because there's instant camaraderie and connection.

There is also a growing and active Parentless Parents Group page on Facebook. Parents from all over the country (and the world) are coming together to discuss the specific challenges of being a parentless parent. I think the in-person support groups and the Parentless Parents Facebook page are so helpful because sometimes strangers understand you better than your own family and closest friends do. There's no need to explain yourself. We all "get" it. And that's incredibly validating.

I think too there are populations who will identify with this book as well as Hope's Motherless Daughters who do not technically belong to the groups identified in these two books' title.

I identify. My mother--while very generous in contributing financially to my kids' college funds--wasn't able to give me the day-to-day support I needed as a young parent, even though she was alive.

Thank you for this discussion. I think many new parents will be helped by identifying this loss.

Searching for the Ultimate Dating Site? Join to find your perfect date.