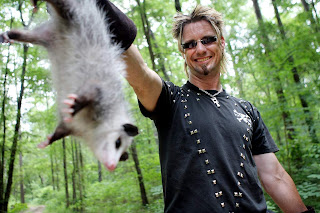 The other night I stumbled upon Billy the Exterminator on A&E, and I’m going to go out on a limb here to admit: I’m hooked. If you haven’t seen it yet, it’s a reality show a about a tough-guy exterminator who drives around greater Shreveport, Louisiana, in an enormous black Toyota Tundra pickup truck emblazoned with his company’s name--Vex-Con--on both sides, and takes on tough-guy exterminator jobs that include (but are not limited to) snakes, rats, cockroaches, crocodiles, foxes tearing up backyards, squirrels trapped in fireplaces, and in one unforgettable episode, a possum carcass rotting underneath someone’s house.

There is no job too large, too small, or too gross for this guy.

Billy Bretherton--that’s his name. He’s a former Air Force sergeant—I’m guessing he’s in his mid to late 40s—with a penchant for a black cowboy hat, thin wraparound black shades, black leather, chains and studs. Think Axl Rose meets the Orkin guy and you’ve got the idea. Though I’m not sure how I’d react if my Orkin guy showed up sporting motorcycle boots and a weird little goatee. It’d definitely make Thursday mornings more interesting around here.

Billy’s family co-stars with him and They. Are. Priceless. His mother, Donnie--a wisecracking Southern mama with excellent pouffy blond hair--calls Billy on the cell phone about every ten minutes with a new, challenging, and reliably disgusting or dangerous job, thus giving him the opportunity to slip in educational moments (while talking to her) about the biological or physiological risks homeowners will face if he doesn’t get there fast. (“A rotting animal under a house can be a breeding ground for bacteria and disease.”) There’s also Billy’s father, Big Bill, whose main purpose seems to be moping around in the background while he recovers from a recent heart attack and worries about the business end of things. Billy is often joined in the field by his younger brother, Ricky, who’s categorically stuck in 1985, layered, blond collar-length hair and all. Ricky is my favorite. I think of him as the biggest risk taker of the clan, since he’s apparently allergic to wasps yet, despite his mother’s frequent warnings to bring his EpiPen or wear a mask, consistently ignores her advice in favor of honoring his Inner Dude. In one episode he goes up in a cherry picker with Billy to destroy two wasp nests under the eaves of a hotel roof, with only his bare hands to protect his bare face. You can't help thinking, if this guy is really at risk for anaphylactic shock, is he crazy? Or dumb? Or both?

Billy and Ricky call each other “dude” and “man.” A lot.

As with many reality shows, a fair amount of this one is probably scripted, but something about it feels like it has an edge of authenticity to me. For one thing, the critters all look real. (Anyone who actually knows me knows I have a lifelong phobia of rats, so I have to flip the channel whenever he pulls one out of a trap.) And sure, Billy is a character, maybe even an invented one, but Vex-Con does have what looks like a legitimate web site and business that could have predated the show. Or maybe it’s the gritty surroundings of semi-rural Louisiana that lend the show its credibility. Definitely the clients look real; this is no beauty pageant.When an elderly guy with a lung condition sheepishly drawls about Billy’s stomping, leather-and-chains arrival at his cockroach-infested trailer, “Well, he looked kinda scary but I knew he was the one for the job. He looked like he was ready to kill something” you have to at least hope a line like that wasn’t scripted.

Plus, these client scenarios—I’m not sure they could be invented. I always found it insulting to the collective intelligence when Jeff Corwin’s just happened to stumble upon a rare viper while trekking through the jungle with a cameraman. Corwin’s expressions of anticipation and surprise at those moments were so disingenuous the veil between real life and cinematic orchestration evaporated on the spot. But think about it: would anyone right-minded let producers infest their trailer home with 10,000 dead and living cockroaches just for six minutes of televised notoriety? Or stick a rotting possum carcass under their bathroom floor so A&E viewers can learn that their house smells really, really bad? I kind of think not.

I was a guest on an episode of a reality show about six years ago, back when these types of shows were still relatively new. Naively, I still thought that much of what we were seeing on these shows was real. So I was completely unprepared for the amount of stage direction that took place, like producers watching the action on a back-room screen sending orders into the cameraman’s earpiece about how to direct group conversations, and having to reshoot “natural” scenes to do them differently the second time. And this was a very well-respected, well meaning show. The premise was a group of women who wanted to change their lives for different reasons were put up in a mansion in downtown Chicago and assigned life coaches to help them achieve their goals. I was there because one of the women was a motherless daughter trying to find out information about a mother who had died when she was very young. She felt she couldn’t move forward in her life until she found out the details of her mother’s life and death. I was brought in to have dinner with her and the local Motherless Daughters group, and to then go back to the house with her and see some art projects she had made to commemorate her mother’s life.

The experience was decidedly more surreal than real. Oh, what the hell: I'll be honest. It was a total mind f&#*. It's like finding yourself at a board meeting completely different than the one you thought you were attending, and you have to learn the rules of protocol on the spot so you can play along.

At one point I was brought into a back room for an interview and was instructed to begin speaking a sentence with the opening line, “When she told me about her stepfather, I was thinking…” What I really wanted to say was, “When she told me about her stepfather, I was thinking, ‘This woman needs a good psychologist, not a life coach,” but instead I said something blandly educational about motherless women’s relationships with their stepfathers. I felt obligated to offer something helpful and useful and to sound like an expert, given that I’d been flown out to Chicago, fed a five-star dinner, and put up at the Hotel W for a night. In other words, I was deliberately not being real, because I was trying to please people who seemed to have a very clear idea of what they wanted me to say. But maybe I was dead wrong about that. Maybe being honest would have been better, and maybe that was really what they wanted, because whatever I said didn’t wind up making the final cut. If I’d been authentically myself in that moment at least I would have been speaking a truth instead of trying to participate in a form of packaged and manipulated truth that, in the end, isn’t very real at all.

All this is a long way of saying that I know reality shows aren't really “real.” Just like memoir, they start with the raw material of life (which is often slow and dull in its purest form) and are then shaped and edited it into a narrative package that entertains. The closest thing to a Real reality show I can remember was back in 1973, when PBS ran the documentary An American Family, after filming the everyday domestic dramas of the Loud family of Santa Barbara for seven months. Anyone remember them? I was only nine, but I watched it religiously. Over the course of the season the typical American family was exposed as the anti-Brady Bunch. The parents’ marriage started to unravel (whose wouldn’t, with TV cameras in your kitchen every minute?). Their oldest son, Lance, was revealed to be gay. By the end of the show, we realized that an experiment to give us all a peek into ordinary middle-class life had devolved into a very big mess. More sociological experiment than award-winning TV, the Loud family should have been our cautionary tale about what happens when you ask people to live authentically in front of a camera. We should have learned back then it can’t be done.

Of course, this begs the larger question “What is real?” if so much of what’s presented as “real” today is airbrushed, scripted, orchestrated, tweaked, shaped, stretched, or just made up? I don’t know. Maybe all we can ever know for sure is what we feel—the love we have for each other, the grief that comes from loss, the triumph from achievement, the despair from lack of hope, the fear of danger, the exhilaration of risk.

Lance Loud died in 2001 from complications from a crystal meth addiction, Hepatitis C and HIV. That's about as real as it gets.

Maybe this is why I’m liking Billy the Exterminator right now. Because once you strip away all the attitude and the bad hair and the “Dudes” and the shades, it feels like it’s just about a guy showing up to help regular people deal with everyday problems. Sometimes a dead rat in a trap really is just a dead rat in a trap. And maybe Billy’s are planted there, but the ones that we trap a couple times a year in the space underneath our bathtub are real. I know that to be true.

Not that I actually look at them, of course.

I love this, "Maybe all we can ever know for sure is what we feel—the love we have for each other, the grief that comes from loss, the triumph from achievement, the despair from lack of hope, the fear of danger, the exhilaration of risk."

And that sounds like a show my husband would love. Have you seen Swamp Loggers? His fav. That and the ice truck guys.