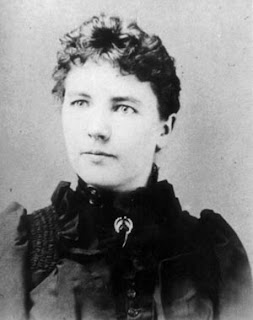 There’s an odd pleasure to be had from reading other people’s letters, particularly historical correspondence that captures both a character and an era. I relearned this today over at the Herbert Hoover Presidential Library over in West Branch, Iowa, where I spent several hours reading years of letters between Laura Ingalls Wilder and her daughter Rose Wilder Lane.

Yes, that Laura Ingalls Wilder. The author of the Little House on the Prairie books. Although calling her “the” author takes some of the credit away from Rose, who’s widely believed to have been her mother’s ghostwriter and, based on the correspondence I read today, years earlier also functioned as her mother’s editor and writing coach.

That’s what brought me to the library. Sort of. Initially I became interested last summer at the Hoover Days festival, when a representative from the Laura Ingalls Wilder museum in Burr Oak, Iowa, (one of about five such places sprinkled throughout the Midwest, one in each place she ever lived) told me her daughter Rose’s papers were archived at the Hoover Library and that they included the ur-manuscript of all the Little House books, which Rose had divvied up and shaped into the series. Rose had been a biographer and friend of the former president; that’s why her papers are there.

All year, I’ve been planning to go the library to compare the original text against the final versions, mostly for my own edification as a nonfiction writer, editor and teacher. And then over the past few months, I’ve found other reasons for wanting to go, too. I’ve been considering doing some ghostwriting work—of which there’s a lot in L.A. right now, what with so many celebrity memoirs getting snapped up by publishers looking for big sales figures—and so am interested in how the Laura/Rose mother-daughter team collaborated on Laura’s life stories.

Also, I’ve been having a really tough time lately selling Eden on the merits of reading. Her reading level is appropriate for her grade, even a little above, but she just isn’t interested in chapter books at all. I’m on a campaign this summer to try to get her involved in stories, preferably in a series for children, and so I thought of starting with the Little House books, which I devoured when I was about her age. I seriously thought I was the reincarnation of Laura and even took to wearing a bonnet around the house. It didn’t hurt that I looked like Melissa Gilbert in the TV series (or so everyone used to say). At some point I wrote a letter to Rose, unaware that she’d already died, and received a typed letter in return that, naturally, I thought had been written especially for me even as my mother tried to explain what “form letter” meant.

So, back to the library. I showed up around 1:30 p.m. with two hours to spend, thinking I’d ask just to see the manuscript that developed into Little House in the Big Woods, which Eden and I are about to finish together, and to come back another day to look at the correspondence between Laura and Rose. But the librarian, Matt, convinced me to look at the whole collection which, I soon discovered, will take me about, oh, four years to read in full. He wheeled out six fat legal envelopes full of files—about four linear feet of material—most of it Xeroxed from the originals, and then ran back to retrieve the original manuscript of The First Four Years, the last book in her series. It’s kept wrapped in a complicated folder and was handwritten on grocery store writing tablets. He had to put on a pair of white gloves to handle it. I simultaneously thought, What the hell? and felt like crying from the sheer awe of it. Sort of how I once felt upon seeing handwritten royal decrees from the Middle Ages on display in the British Museum reading room, or a letter penned by Virginia Woolf in a manuscript museum.

For the next two hours I became completely absorbed in letters Laura wrote to her husband back in Missouri (Almanzo--remember the hunk who played him in the TV series?) when she went to visit Rose in San Francisco in 1915 by taking the train across the country, and then attended the Pacific International Exposition, as well as a few exchanges in which Rose encouraged Laura to write magazine articles about farm life and heavily edited her first attempt at publication. Rose secured Laura a $150 fee from Country Gentlemen for a her first published piece, about kitchen renovation. (I kid you not.)

But my favorite paragraph comes from a letter Rose wrote to her mother before that cross-country trip in 1915. Here it is:

“I bet the letter you wrote for grandma and Mary about your getting started to writing could be put verbatim into that “story of my life” thing. If I were you I’d have them save it and send it back, and I’d look at it with that viewpoint and see if I’m not right. I bet it’s better than you could do trying to write it for the story.”

“That ‘story of my life’ thing”--is that not the understatement of the day? A dozen books and millions of dollars in royalties later: yes. It was definitely quite the thing.

It's amazing how the tiniest bit of outside perspective can change the entire meaning of a thing. Or can elicit meanings of which the creator was wholly unaware. I feel like that sometimes when I read back on my journals from high school - back then I was caught up in the anguish (or whatever) of the moment, but now I see the bigger themes and the arc of the story.

Fascinating post, Hope, in so many ways, from the reluctant reader daughter to the inclination toward ghostwriting to the fascination with Laura Ingalls Wilder as a youth to the point of copying dress. Most fascinating of all is the archeological digging you are doing that will lead who knows where but has already enriched your life and others too through this blog. Thanks. There is so much I can relate to here.
Patricia who was your student at Antioch some 8 or 9 years ago where you told me a personal essay I wrote was actually the sketch for book and that's what it became . . . thanks for that too.

HHHHHUUUUUUGGGGGEEEEE Laura Ingalls Wilder fan, love this story, and not enough can be made about "That 'story of my life' thing!"

The encouragement from one person to another can never be taken lightly. Every word, if the person is listening, can affect change and create art. Your observations and insights are powerful and became the inspiration for me to write all day yesterday and into the night.

I just read a celebrity biography where I was wondering why, for the sake of those reading, he didn’t hire a ghostwriter, instead of a co-author. Seems like another good avenue for you.

I was absorbed in your blog for so many reasons. I gobbled up Laura Ingalls Wilder as a child, felt as if I was there in the library doing the research and loved the visual of you of wearing the bonnet around the house. Thank you for sharing your learnings and thoughts.

Oh,your blog is very nice .I really like it ^^!

I love this post, thank you. Loved those books, and the tv series. I remember a diary entry of mine (I'll have to find it now) from when I was maybe ten or eleven and I got very upset because Pa had to shoot a bear on the show and it made me think about all kinds of pre-existential things... I know two little girls who are 5 and 8 and insist on wearing their Mary and Laura costumes around Portland on a regular basis.

It is indeed amazing to get some perspective on the way we never know the value of our stories, nor value of others' encouragement.

I want to go to Iowa and sit and read those letters...

Hi! I will follow you.
I`n a brazilian children book writer, I LOVE laura, even administrate a comunity in multiply site.
I wish I were there to read this correspondence!!

Thanks, Angela! I came back to Los Angeles with a huge file folder full of Xeroxed letters. That library was a gold mine. If you're a LIW fan, you should for sure get a copy of The Wilder Life: My Adventures in the Lost World of Little House on the Prairie by Wendy McClure. It's both informative and HILARIOUS. Highly recommended.