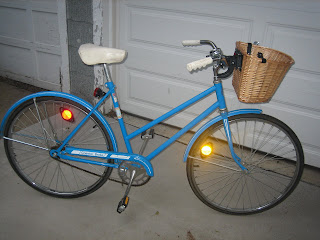 I’ve been in Iowa for a solid week now, time enough for quite a few things to happen. I could write about the amount of rain that’s come down on us in the past eight days; or how the Iowa River is at grass level in City Park and threatening to flood; or about how happy I am to be a pedestrian again for much of the day; or about the three-day road trip to Missouri that Eden and I just took to visit Maya at camp.

But what I really want to write about is my new sky-blue bicycle.

Eden and I found at a garage sale for $25 the day we arrived, and it’s precisely the bicycle I was looking for. Vintage, retro, recycled, the kind of bicycle that makes me happy just to look at but won’t send me into paroxysm of panic and guilt if it’s stolen. When I brought it to a bike shop in town that specializes in vintage items, they fixed the rear spokes and gave me a wider set of handlebars for a $29.41 bill, labor included. This is the bargain of the decade, folks.

All these years that I lived in Iowa City and have been coming back for summers, I’ve never biked around town. As a graduate student I had an early mountain bike (circa about 1987) and would sometimes go for long trips out in the country, riding past cornfields for hours. But to get to class or just around town? No. It’s kind of mystifying in retrospect, actually. Why didn’t I ever consider biking a valid form of transportation? Only now, twenty years later, am I discovering that a whole new world opens up to you when you cruise along at 12 mph.

For one thing, you make fast friends with the people at bike repair shops. When I brought the bike in on Tuesday to drop it off for repairs, the woman over at 30th Century Bikes—super short hair, piercings, tank top, tattoos, very friendly, the epitome of hip—confirmed my suspicion that this blue cruiser is, actually, just a little too small for a 5’8” person like me. But we agreed it was worth trying to make it work.

“It’s exactly the bicycle I was looking for,” I told her. “And how often in life do you find exactly what you want?”

She nodded. Possibly considered I might be pathetic for saying such a thing, but generally looked like she agreed. Then we debated the merits of replacing the tires this year or next. We decided next. She showed me how to date a bicycle by looking for an inscription on the wheel hub. Mine said 1950 but she explained that sometimes the rest of the bicycle is a few years newer than its wheel hub. The bike says Montgomery Ward on the frame (how fabulous is that?) and we discussed that it might have come from the catalog. Whee—I was learning a lot.

On the way back home (walking, this time) I stopped in Uptown Bill's Coffee Bar on Gilbert St. How is it possible that I’ve been coming to Iowa City since 1989 and never knew about this place? It’s like stepping into a time capsule, including the three tough guys reading the day’s paper at the square linoleum tables. The only tipoff that it’s 2010 is the espresso machine behind the counter.

I wandered into the used bookstore in the back—only in Iowa City would you find a random used bookstore in the back of a vintage coffeeshop—and B. came back to see if I needed any help. I noticed the NY tattoo on his forearm, and asked if he was a Yankees fan. Turns out he’s not, but he was a New York City homicide cop for 27 years before moving to Iowa. There’s bound to be a story there, but he didn’t want to tell all of it and it wasn’t my place to ask for the details. Sometimes being a writer means knowing which questions to ask, and sometimes it means knowing when to back off. So we talked about a dozen other things for the next half hour and then on a back shelf I found a copy of William Zinsser’s On Writing Well, which I’d been looking for since May. This pleased me to no end, and I bought it and promised B. I’d come back later in the week.

The bicycle was ready on Thursday, so after I dropped Eden off at camp I walked over to pick it up. When I walked by Uptown Bill’s B. was outside sweeping the sidewalk, so I stopped to tell him this reminded me of all the doormen in New York after a big snow, and then we talked about New York for another 20 minutes before I remembered that I was expected at the bike shop. So in the interest of time I took a shortcut the back way, through an empty alley and parking lot.

As I was walking south through the parking lot toward the shop, a man in an electric wheelchair came cruising north along the sidewalk on my left. Iowa City is something of a mecca for the physically and mentally disabled: it’s mostly flat, very accessible, and has a noticeably high number of group homes around town. You routinely see groups of disabled teens walking through downtown or the indoor malls with aides accompanying them. This particular man appeared to have some kind of palsy and he was alone. It was just the two of us back there. I watched him steer his wheelchair toward a break in the curb that sloped toward the parking lot…and from my angle I could see the opening was too narrow for his chair to fit through.

That’s when I started running in his direction.

What happened next happened fast. He turned the chair around backwards to back down the slope, but his left wheels caught on the curb, and instead of making a smooth transition down the slope the chair tipped wildly in my direction, as if it was going to dump him onto the asphalt. I stuck my hands out to catch him, but I was still too far away and running fast. Yet somehow, somehow, the chair righted itself. I swear to god, it felt as if my hands somehow pushed him back upright, even though
I was still a good fifteen feet away when it happened.

“That was close,” I told him, when I finally made it to his chair.

“That was close,” he repeated. His speech was garbled, but mostly intelligible.“Thank you for that.”

“Have a nice day!” he shouted, as he zipped away north.

I stood there for a moment, struck by the random encounter. Was it really random? A butterfly flaps its wings in China and…well, we all know that story by now. But here’s another one: a homicide cop in New York quits his job and a woman finds the book she’s been searching for for months. Or a woman buys the perfect $25 sky-blue bicycle in Iowa City, and by some strange twist of fate a man in a wheelchair therefore won’t tumble out onto the pavement alone and have to lie there without help.

I really think we’re all connected somehow, in an intricate matrix of interdependent relationships. And I have the feeling this blue bicycle is going to be the catalyst for some very unusual and interesting times. I just do.

No such thing as random! Love this story, can't wait to see the perfect bike up close and personal in just a few days! SO EXCITED!

Your story made me think of one of the sutras of the Aquarian Age. "Recognize the Other Person is You". What a lovely story to start my day. Thank you for sharing Hope.

Beautiful piece, Hope. I love the stream of connections and encounters. I rode my bike everywhere all five years in Ann Arbor - you will love your bike and make more connections!

Everything about this story makes me a little angry at myself for not being more disciplined so that I could have made it to Iowa this summer for your workshop. Bah. Hopefully next year.

that is a GREAT bike, hope.

Encounters like this, little bits of life, are what make it worth living.

A retro coffee shop with a used book store? Heaven! Wow, I want to go.