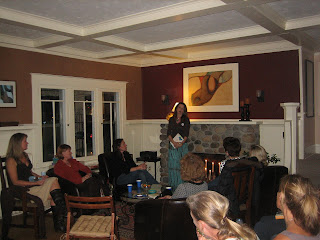 I've been traveling around for the past two weeks, so far in the New York area and in three sites in Oregon, soon to leave again for Austin, to promote The Possibility of Everything. The majority of these stops are for house salons, which are private parties where 20 to 30 people gather for an evening of food, drinks, and conversation. I read from the book and answer questions. We talk and eat and drink some more. Typically, book stores come to do off-site sales. I'm finding them to be more intimate and more personal than usual bookstore readings, even more rowdy at times. (With the exception of the reading at Bloomsbury Books in Ashland, Oregon, which may be the last city in the U.S. where people listen to a radio show in the morning and then show up at a bookstore reading at 4 p.m. just because they're curious to hear more. Ashland, you are my new favorite place!) Plus, at a salon I really get to know readers, instead of being able to exchange just a few sentences with them when they hand me a book to sign.

I'm appearing at bookstores as well, and also literary festivals, but these house salons: they are a huge amount of fun. Still to come after Austin: Chicago, Iowa City, San Jose CA, Portland OR, and South Florida. Let me know if you'd like to host one in Central or Southern California--we still have room for a few more!

So many thanks to Wicki Boyle in New York City, Allison Gilbert in Irvington, NY, Jennifer Margulis in Ashland, Oregon, and Gretchen Newcomb in Hood River, Oregon, for hosting the first four salons of this tour. (That's me speaking in Gretchen's living room in the photo above.)

Hope, you are our new favorite writer (I think everyone in Ashland really loved you and was really impressed!).

Here's the link to the post I wrote about the salon at my house, in case your readers want to see more pictures and read more:

Thanks for coming our way!

I will host a Denver area salon, Hope, with pleasure, if you make it out this way!