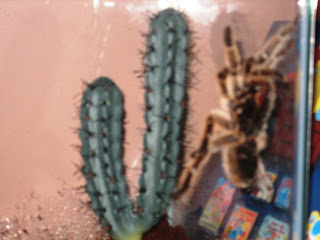 Our pet tarantula, Billy Bob, molted yesterday, and it was one of the weirdest things ever witnessed in this house. We got Billy Bob back in early May, not long after I returned from Belize, and have been waiting for him to molt ever since.

First, a couple of words about Billy Bob. He is one freaky little dude. He's a Chilean Rose Hair, easy to find at any PetCo--kind of the Toyota Corolla of tarantulas. He lives in an aquarium in our TV room and eats live crickets, enough said about that. Most of the time he moves very s-l-o-w-l-y, flexing his hairy legs one at a time, until a cricket walks over to him and then he goes phoom! so fast you don't even see him grab it. My friend's son took care of him over the summer while we were away, and we though for sure he would molt then. But no.

For the past couple of days he seemed kind of down. He wasn't moving much, had a dull color, and wasn't eating any crickets. I kept saying, "Maybe he's going to molt," as if I knew what I was talking about. Then yesterday morning he made a small web and flipped over in the middle of it and spread his legs out wide. Maya thought he was dead. I said to give him a while. We read online that tarantulas flip like that when they molt, but he didn't move at all for a couple of hours and I started thinking he might be dead too. Apparently, some spiders don't survive their molts. But by the time we got home later in the evening he was out of his old skin, which is now lying curled up in the back of the cage like a huge, crumpled spider. We'll take it out in a day or two; in the meantime, we're supposed to leave Billy Bob alone for a couple of days while his new skin hardens up. He already looks about 10-15 percent bigger than he was.

I'd post a photo, but we're not supposed to make loud noises or disturb them during this sensitive time, and the flash might bother him. So I'll post a picture of him shortly after we got him.

I'm very proud of the freaky little guy. He had a big day yesterday, and he did well.