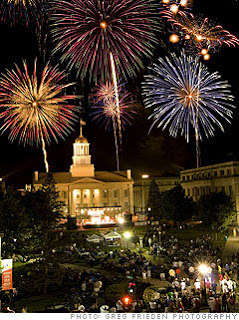 I’ve known you for a long time now, three years as a full-time resident and more than fifteen summers as a visitor. So I’m speaking from experience when I say: You’ve really outdone yourself this year.

Normally, the Julys you offer are--in a word--intolerable. You're partial to Julys with triple-digit heat indexes. Julys with humidity so thick we’re still swimming through it at 11 p.m., Julys with automated phone calls at 1 p.m. warning us to stay inside.

But this year,  four consecutive days of temperate weather and nights that require long sleeves—at the end of July, no less!--are an unexpected, welcome gift. With stunts like this, you remind us you’re capable of moments of profound humanity and crippling beauty, and that despite your frequently intolerable conditions, hope of improvement still exists. You’re like the Middle East of the Midwest, Iowa City.

As a graduate student at your university, I taught the equivalent of freshman composition for three years. When we graded papers, my fellow instructors I used what we called “The Shit Sandwich”. It began with a few lines of praise for whatever was currently working in a paper--and being a UNESCO City of Literature and home to so many writers per capita, Iowa City, you know there’s always something of value in a piece of prose, and if not, that it’s permissible to lie—followed by multiple, lengthy paragraphs about everything that wasn't working and needed to be fixed, and ending with a few lines of lukewarm praise that essentially repeated the opening lines.

Your summers, Iowa City, are usually a Shit Sandwich. They start with a stunning week or two in June, followed by months of physical torture, and ending with a week or two in  early September so gorgeous, and so reminiscent of mid-June, that we remember why we put up with you for the other 11 months of the year.

But because I know you, Iowa City, I know what comes next. You can’t fool me. This summer is going to be an inverted Shit Sandwich. The oppressive heat that greeted me upon arrival two weeks ago will return, probably very soon. And it will last for a long time. Probably until I leave.

This summer, the bread is in the middle.

I could be upset about this, Iowa City. But I’m not. That’s where your brilliance comes in. You know that just a few days of unanticipated, exquisite weather in July are enough to change our minds about you. We will forgive you the rest of the summer this year. We will forgive you mostly everything. Very possibly, some of those hundreds of writers who've come here for summer workshops will decide to move here permanently. Or at least buy summer homes. That would be a good thing, Iowa City. Maybe even strategic. Because you have a lot of inexplicably large and ugly new condo complexes you're going to somehow need to fill.

In conclusion, Iowa City, I offer you my gratitude for these past few days. They’ve been the highlight of my summer. I won’t soon forget them. Yes, I do realize that an inverted Shit Sandwich is still a Shit Sandwich. But this year you’ve taught me something important: Sometimes the middle is a fine place to be.

I could say a few things about winter, too, but let’s not go there right now.

Enjoy! Although I thought I would die in my hotel room with no air conditioning, I think fondly of my time in Iowa City!

I 'm so glad you could come across this site ,
and we hope to establish good relations with you.
greetings from me ( OBAT KUAT )

Hello, i am Jessica Wayne from TX, USA. Life without my husband was a real mess for me and my children I am so happy to get my Ex back through the help of Dr Noble the spell caster . My greatest surprise was that 48 hours after the Doctor prepared the spell for me, my husband who has abandoned me for 4 years suddenly called me unexpectedly and am so happy that we have come to become one again through the help of Dr Noble and am so happy to be with my husband once again. Dr Noble is a very wonderful spell caster, you can contact him if you need his assistant because i know he can also help you. contact him through his email: templeofjoyandprosperity@gmail.com +2349039520524 immediately