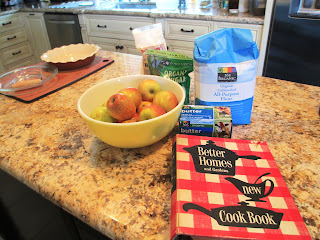 For years, my daughters have been asking me to teach them how to bake an apple pie. I suppose they view it as a gold standard of domesticity, the kind of task and knowledge that mothers naturally pass on to their girls and that they therefore expect to receive. Problem is, I’m not much of a cook and can hardly claim expertise in any matters domestic, partly because I lost my mom before I realized these things were valuable to learn—she knew how to bake an apple pie, though lemon meringue was her trademark—and partly, I suppose, because willfully refusing to learn how to bake pies effectively separates me from my mother and therefore, in a form of twisted logic, from her fate. I’ve felt guilty about having two daughters who want to bake, though, as if somehow I’m not stepping up to the maternal plate in the manner they want or need.

Isn’t pie baking (and knitting, and sewing, and knowing how to use a Crock Pot, and all the things I’ve taken halfhearted stabs at during the years and then promptly abandoned) just part of what mothers do?

And then this past Sunday while my husband was on a trip to New York I found myself home with the girls with a leisurely afternoon and no plans, a rarity for us three. For a reason that still escapes me, even as I sit here writing, I decided it would be a fine day to learn how to bake an apple pie.

I started by Googling “basic apple pie recipe.” The ever-trusty Cooks.com came right to the rescue, but something about referring to a laptop or iPad screen while baking felt fundamentally wrong. I decided to look in my rarely-touched stash of cookbooks for a useful alternative. My new-ish Better Homes and Gardens cookbook didn’t have a recipe for apple pie. (I know. That surprised me, too.) An older New York Times Cookbook I picked up somewhere years ago didn’t have one, either. It started to occur to me that cookbooks either a) assume that everyone with an interest in cooking already knows how to cook an apple pie; or b) an apple pie is just too basic for their readerships, who’d rather learn how to make apple-strawberry-rhubarb gluten-free latticed cobbler extravaganzas, or some such.

In the end, the recipe I found was almost exactly the one on Cooks.com and came from my mother’s old Better Homes and Garden cookbook from the early 1960s. I inherited the book when I left for college, or maybe I just took it with me without asking; I honestly don’t remember, but I’ve carried it with me from state to state, house to house, for the past 30 years. The book was a staple of my childhood, with its red-and-white checked hard looseleaf cover and silver-ring binder interior. The printed looseleaf pages have turned sepia with age, and over the years someone (my mother? me during college?) unclipped some of the baking recipes and tucked them inside the front cover without clipping them back in. But there about 2/3 of the way into the book, right where they belonged, were the recipes and instructions for double pie crusts and a simple apple pie.

The girls and I had most of the ingredients on hand – flour, salt, butter, apples, cinnamon, nutmeg, and sugar. We also had my mother’s wooden rolling pin and her big, plastic Tupperware mat with the concentric circles that tell you how wide to roll the dough for 8-, 9-, and 10-inch pies. My daughters love that mat. It looks progressive and vintage at the same time. They also like knowing the rolling pin we’re using is the one from my childhood home. Baking this pie was practically a three-generational effort, or as close to it as we could get.

With three people on the job, the pie took about 45 minutes of prep time and about 30 minutes of oven time. And the result was much better than you’d expect from three cooks who’d never tried it before, even after Eden and I got absorbed in a logo guessing game on my iPad and didn’t hear the oven timer go off for at least five minutes after the pie should have been done. Oops.

I don’t harbor any illusions that I’ll become a master baker, or magically transform into a crafty mom. I still don’t knit, and I still can’t sew. Most nights will still find me playing board games or proofreading high school papers rather than wielding a Cuisinart. But there was a certain, deep satisfaction that came from tackling that pie, from discovering it wasn’t as difficult or as mystifying as I’d imagined from a distance, and from having my mother participate in the enterprise with the two granddaughters she never met, even if it was just through her possessions. My older daughter, who took most of the pie to school to school today for a lunchtime picnic, asked if she could inherit the cookbook one day. Which will be exactly the right place for it to land.

(And I spent part of my Sunday reading the book you co-wrote with Emilio- quite lovely so far!)

Hope you created a PERFECT day- would love to one day spend the same with my daughter.
Look forward to reading the book you co-wrote.
In kindness
Colli

What a perfect day with your girls...the kind you remember as you sit in a rocking chair some day.
"Girls, remember the day we baked the pie?"...and they'll know exactly which day you're referring to.
I taught myself to smock after my mom died. My toddler daughter (named after my mom)had mostly neutral clothes because she was blessed with a little brother and all her clothes were destined to be handed down to him.
So I figured a smocked dress was definitely needed.
I checked out stacks of library books, grilled the ladies at the fabric store, then dove in. I made exactly one dress, that she wore for the Christmas picture that year, and I never felt a need to make another.
Just knowing it wasn't as hard as it seemed, and knowing if I didn't figure it out myself, my mom wasn't here to teach me, was enough to inspire me.
My daughter's smocked dress, still in a storage tub in the basement, is so much like your apple pie.
Thanks for reminding me of that story. And thanks for continuing to share your beautiful girls with us.
Judy
justonefoot.blogspot.com

I have the same cookbook. I don't cook much anymore but that is my go to book if I do. Lovely adventure for you and the girls.

Nice piece, Hope. Two months after my mom died I found out my dad was having an estate sale (on Mother's Day -- I know; long story).I drove all night from Knoxville, TN, where I was living and working, to our St. Louis home. I managed to sneak away with my grandma's porcelain cookie jar (in the shape of a Dutch lady) and the cookbook that women had used for several generations in our family. The book includes hand-written notes ("very good" and "add a little more sugar"). I still use the cook book today.

I have dibs on my mom's exact same cookbook.

My mum died 20 years ago when I was 17. I regularly use her rolling pin, her mixing bowls, her electric whisk, her cake tins, the Same knitting needle she used to prod into cakes to checked if they were cooked enough before removing them from the oven, and I have her hand written recipe books!! And as my 4 year & i bake together we often talk about granny Sylvia! It's v lovely to hear so many 'motherless mothers' do the same!

I'm in the UK, & just noticed your blog for the first time (altho had you books for years), I will enjoy spending this evening having a good read thro the website & blog!

Many thanks, Ros xx

Hello, i am Jessica Wayne from TX, USA. Life without my husband was a real mess for me and my children I am so happy to get my Ex back through the help of Dr Noble the spell caster . My greatest surprise was that 48 hours after the Doctor prepared the spell for me, my husband who has abandoned me for 4 years suddenly called me unexpectedly and am so happy that we have come to become one again through the help of Dr Noble and am so happy to be with my husband once again. Dr Noble is a very wonderful spell caster, you can contact him if you need his assistant because i know he can also help you. contact him through his email: templeofjoyandprosperity@gmail.com +2349039520524 immediately