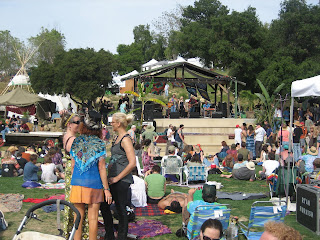 I feel about Earth Day sort of the way I feel about Mother’s Day. As in, shouldn’t every day be Earth Day? Still, I’m always up for a reason to celebrate it once a year in Topanga, where the festival has evolved into a two-day happening of live music, dancing, demonstrations, face painting, hula hooping, and really excellent vegan food booths.

The girls and I went both days this year, accompanied on Saturday by our friends Amy and Eber who came up from San Diego for the festivities. Since the parking situation along Topanga Canyon Boulevard was impossible as usual, forcing us to park somewhere near the Mexican border, we rode the shuttle bus to the community house, which was an experience unto itself. It was a converted school bus painted royal blue with psychedelic swirls on the outside, renamed Alice the Wonderbus. Inside there were couches lining both walls, comfy stacks of pillows up and down both sides, a big stuffed tiger, a couple of Mad Hatter hats lying around, and shag rugs covering the floor. My friend EJ said her kids hula hooped inside the bus on the way to the festival, though it was too crowded both days we were on it for Maya and Eden to break out their hoops. Still, you know it’s going to be a good party when getting there it twice as much fun as anything you’ve done in the previous week.

Despite a forecast of rain on Sunday we had two gloriously sunny, warm days. Loads of friends milling around, wine tasting, massage tables, jewelry and clothing booths, info about solar power and sustainable housing, a bellydancing performance on Sunday featuring dancers from ages 4 into their 60s, and some guy who calls himself Fantuzi leaping around on stage singing and dancing for 15 minutes both day. (I’m going to start calling my husband Uzi “Fantuzi”. Let’s see how well that goes over in our house.)

Also at the festival, our friend Scott’s unrolled his new local initiative called “Topanga Better Faster” which aims to start community dialogue about opening a food co-op, starting a community credit union, getting a charter middle and high school in town, and—my kids’ favorite—setting up a zip line from the town center down to Pacific Coast Highway. I think the zip line is just for attention, but it’s effective, isn’t it? Scott held his visioning meetings inside a geodesic demi-dome. People: this is Topanga at its best.

What we really need in town is a gas station, reinforced by a bad oversight I made this weekend which resulting in driving Maya and our neighbor to school this morning with my “empty” light on all the way, praying I’d make it to a gas station in time and still be able to get Eden to her bus. But Scott’s idea is to help Topanga become a Transition Town, which means less oil dependent, so I guess a gas station isn’t going to be part of the plan.

Anyway, Earth Day photos will follow. Don’t have a photo of Alice the Wonderbus though, because my camera battery died before the end of the day. Maya hatched the idea of having all her friends transported on it to her Bat Mitzvah party, which I think would definitely leave an impression on a bunch of 13-year-olds. Probably on the adults, too. We’ll probably wind up hanging out in the bus all night listening to Jefferson Airplane while the kids dance to Lady Gaga. Rock on.

Rock on! Love all the pictures! Love the idea of a transition town!

heheh thanks to google alerts on alice the wonderbus I can give you some pictures! I was so sorry to miss this weekend but I am the one who painted the Wonder Bus, and I am so glad to hear that so many people enjoyed her at the earth days.

we have a bunch of pictures posted up there :D

Alice the Wonder Bus has a Facebook page? I'm so loving that. Will become a Fan immediately.

Fun fun fun! These are the moments we make lifetime memories for our kids. I am glad you take the time to go to fun stuff like this, for the environment/community, but also for the memory building. Your girls must have stored up a ton of new ones this week!

Oh! I miss it all! Uzi Fantuzzi is sooo good! Can't wait to try it next time I see him! And Hood River is big into the transition town thing..just had one of the architects of the concept speak here.