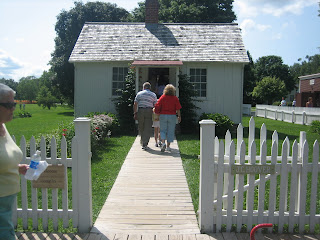 If not for the Hoover mark of distinction, West Branch might otherwise be synonymous with any small Midwestern town, postcard-perfect with its main street, Victorian clapboard houses, and wide green parks. Though we've spent the past six summers in Eastern Iowa, this is the first time we've gone to Hooverfest. Usually we hit Solon Beef Days and, last year, the Lisbon Kraut Festival, but having missed both of those this year due to Maya's camp schedule, we decided to give Hooverfest a try.

It was more of an outdoor fair than a carnival, with a plethora of historical booths and craft demonstrations lined up throughout the town's central park. We walked through the tiny two-room house where Hoover was born, and saw his father's blacksmith shop. (Little known fact: Hoover was orphaned at age nine.) The girls had the chance to grind cornmeal by hand and try out a two-handled saw. We had a long talk with the women representing the West Branch Historial Society, as well as with a man named Steve from the Laura Ingalls Wilder Museum in Burr Oak, Iowa. Apparently the Ingalls family lived for a year in Iowa when Laura was 8 or 9, but since this predating the Little House in the Big Woods time (Book 1), she never wrote about it. Who knew?

Like most small Midwestern town fairs, this one had a strong military presence, with tent booths representing the U.S. Army and various other military branches and posts. Normally I'd find this unsettling, lifelong peacenik that I am, but I also have a corresponding deep respect for those who choose to defend the country. Also, everyone was just so darn nice all day, even the guys in military regalia adorned with more buttons and pins than I could count.

At about 4:00 everyone started setting up lawn chairs on the grassy spread next to the Presidential Library so we wandered over to see what it was all about. A musical performance began, with what looked like about 20 youngish men and woman singing and swing dancing to 40s big-band music. About halfway into the performance, a simulated radio announcer came over the microphone and announced that Pearl Harbor had just been attacked by the Japanese, and the performers all stood stock still as if just receiving and taking in the news. I looked around to see if anyone else thought this was as strange as I did, sitting on a lawn on a sunny, green Midwestern day with Japan now a major trade partner across the ocean and just a connecting flight away, but most everyone else seemed to be watching the show intently.

The storyline became a little hard to follow at this point, but then one of the performers announced they'd now be doing a tribute to the various branches of the military, and invited veterans to stand when they heard their divison's song. A group of men four abreast in identical naval uniforms stood when the first bars began. When the music changed, they sat and a few other men peppered throughout the crowd stood up from their lawn chairs and faced the stage, where the performers were engaging in some kind of hokey marching-in-place routine meant, I suppose, to represent uniformity and endurance? None of the men standing on the lawn were younger than 50, so we're talking Vietnam War here, and even some World War II. It was impossible not to notice how straight all the men stood, with such expressions of pride, such a simple gesture but also so profound. It was humbling to watch.
And then another division's song started and an elderly man in front of us stood up. He balanced his left side against a cane, and with his other hand pulled off his baseball cap and started whipping it around in circles above his head in time to the music.

Something about this scene--the senior citizen who could barely stand on his own joyously whooping it up during his moment of honor on a green lawn on a safe and glorious summer day, was almost more than I could handle, and the tears started running down my face. (I have a long history of embarrassing my daughters in public with my random crying jags when I witness things that move me, so they barely even acknowledged this one.) And I thought, what a beautiful, crazy, complicated, mysterious, goddamned fantastic country this is.

As a writer, what can you do with moments like these, what else can you possibly do with them, except go home and try to make art?

Really, that's all you can do.

Hi Hope - checking on my friends from She Writes today. This post got me all teary eyed just reading it -I'd really embarrass your daughters!

Hoover did not steer the US into the great depression. Any serious student of economics and/or history knows that the seeds of the so-called "Great Depression" were sown many years before his election. The causes were primarily too much money supply (the Fed), too much credit, debt and margin trading on the stock market (a regulatory problem that pre-dated the Hoover administration). It was probably exacerbated and extended by socializing large segments of the economy and creation of a fiat currency when we went off the gold standard (FDR). Hoover played a small part, but most of the "economic reforms" that he proposed were rejected by Congress. He may not have rescued the economy from the great depression, but presidents are not magicians and cannot magically fix an economy. He did many other "heroic" things in his life: Belgian Food Relief, UNICEF, Boys and Girls Clubs, Mississipi Flood Relief, relief of Europe after WWII, etc. Millions owe their lives to Hoover. I'm sure in their minds he is a hero.

Thanks for the clarification, therock1963--I stand corrected on the Hoover history. Clearly, it's been a long time since I was a serious student of economics and/or history. I'm in for a much-needed refresher when my daughter does U.S. history. In the meantime, I found Hooverfest quite moving and hope to make it back next year.

Nice post as for me. I'd like to read something more about this theme. Thanx for giving this info.
Sexy Lady
English escort

Looking for the Best Dating Website? Join and find your perfect date.