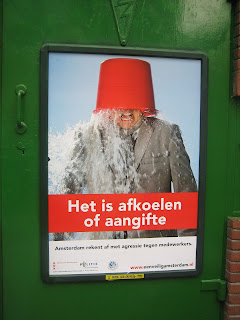 We've been here two days, having tagged along with Uzi on his business trip for the girls' Spring Break. I haven't been to Amsterdam since 1989, when I was backpacking through Europe and staying in youth hostels, and though the city center hasn't changed much physically, I'm here under a whole new set of circumstances now. We arrived on Monday morning, and after a four-hour nap Maya and I walked over to the Albert Cuyp Market to pick up some food. It's about 6 blocks from our hotel, in the multiethnic, bohemian De Pijp section of town--lots of bright colors and noise and activity. The people are just as friendly as I remember from 1989, and everyone speaks English. Pretty fluently. There are thousands of bicyclists on the street at all times, especially during rush hour--people walk their dogs by bicycle, text message, even put on makeup--and cyclists seem to have right of way under all circumstances. Minding the bike lanes takes some very focused practice to avoid getting plowed over.

Yesterday we walked everywhere because the sky was clear, and that's a rarity here this time of year. We tried to start at the Anne Frank House but even at 10:30 a.m. the line was far too long...so we visited the Tulip Museum nearby, the Houseboat Museum, and climbed to the top of Westerkerk, from which we had a stellar view down on the annex where the Franks hid for two years. We ate pannenkoekem for lunch (the Dutch version of pancakes, which resembles ours only in shape), went to an Easter Carnival in Dam Square, and ended the day at the Van Gogh Museum. After a rest at the hotel we met my grade-school friend Kim (who's lived here for 7 years) for dinner at an Indian restaurant and collapsed into bed around 10 p.m. Whew.

A couple of random obervations. The stairs in Amsterdam houses are unbelievably steep. It's probably because houses here were taxed on their widths (a long way from Proposition 13) and aren't very deep, so to maximize living space people scrimped on staircase depth. To get to our guest apartment at the hotel we have to climb up two sets of the steepest, shallowest stairs I've ever encountered. The only appreciable different between them and a ladder is carpeting.

Except when riding bicycles, people don't use their cell phones in public--not while walking down the street, not in stores, not on the tram. It's a sad statement about the U.S. that I find this to be almost unbearably weird.

While the spoken language sounds a lot like German to me, I find the printed language hilarious. It combines letters you'd never see together in English, and often strings vowels and consonents in odd and fascinating combinations. Plus, the words go on forever. We amused ourselves this evening by selecting random words from the Dutch travel phrase book I brought with me. My favorite was voedselvergiftiging: "food poisoning"

Everyone in America talks about how the dollar is still doing poorly against the Euro, but once you deduct Amsterdam's 19 percent sales tax (which is included in sticker prices here) and add 9.25 percent (our brand-new state sales tax, thank you so much Arnold) to California prices, the difference is almost negligable on many items.

Some things here that are noticeably cheaper than they are in California:
avocados
strawberries
orchids
museum entry fees
wooden spoons

Also, this city has the best coffee I've ever met, even though the portions are about half the size of Starbucks (haven't seen a single Starbucks here, blessedly). But there are two Chabads.

Hello Hope, I have just tried to e-mail but the link does not seem to work. I have read your book a number of years ago and I have even written you in response to it. It is an incredibly important work and a gift you have given to the public. Thank you for that.

I grew up in an orphanage in Germany until I was 14 years old. I am 47 now and I am writing a book. I have your book in front of me and I would like to quote a few lines here and there from your book, giving reference of course. I would like to ask your permission to do so first.

Again, thank you for this incredible book. I await your response.

Hi Viola,
Thanks for the request! It's fine to quote from my book without permission from the publisher as long as the total number of words quoted is 250 or less. Any more than that and you'll need to contact Da Capo for written permission. Best of luck with the writing--
Hope

Thanks, Hope. I will get a copy to you once I am finished. It was your book that has helped me more than anything I've read. I will let my editor know of this rule.