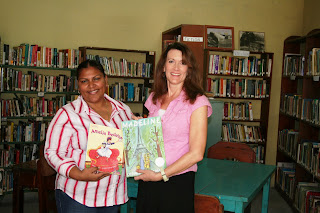 Eight days in Belize, followed by seventeen days at home, followed by ten days in Belize. That's pretty much all of February. I'm in the middle of the turnaround right now, assisting with sixth-grade homework and sorting through mounds of laundry before I taxi back to LAX. The first eight days in Belize were nonstop research and filming, with small pockets of fun fit in. Jeff and I went twice to San Antonio, the Mayan village that's home to the first bush doctor I saw in 2000; stayed at Crystal Paradise Resort (whose owners appear in the story); crossed over to Guatemala for a day to visit Tikal National Park, transported once again by the Amazing Hugo the Driver; then drove ourselves four hours southeast to the Caribbean village of Placencia, where the final scenes of the book are set.
The Cayo district of Western Belize hasn't changed all that much in eight years, at least not by my touristy estimation, but the difference in Placencia is profound. Shortly after we left in January 2000 Hurricane Iris hit Placencia directly and some outrageous percentage of the buildings there were destroyed. Eight years later most of the damage has been leveled or repaired, but it seems that a number of businesses never recovered. About 50 percent of the places mentioned in my book no longer exist, or have been rebuilt, bought out, and changed. Still, I managed to get all my fact-checking completed, and we came back with about five hours of footage. More than enough for a two-minute trailer.
A highlight of the trip was bringing books and supplies to Teresita the librarian at the San Ignacio Library. I organized a book drive in December using Teresita's wish list for 2009 and quite a few of my writer friends generously contributed. Four boxes of additional books should have arrived at the library today, shipped from Los Angeles a few weeks ago. Some of the existing reference books at the library are so old they still bear the stamps of British Honduras--even though Belize was established more than 25 years ago--so new books are a welcome and needed commodity there. Jeff took the photo (above) of Teresita and I the day I brought the children's books to the library. It was a relentlessly hot day in San Ignacio, a Friday afternoon, but also bright and sunny, and Teresita walked us over to a building near the Macal River that's been designated as the new library. It's currently being used as a meat market, so they've got a big renovation job on the way. Stay tuned for more information about how to donate or help, as the year progresses.

Congratulations, Hope! Your trip sounds like it went very well. Get some rest!
Elisa