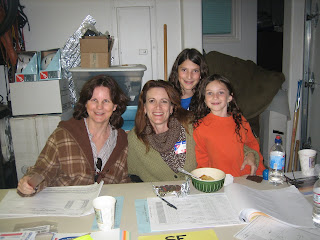 It was a big party at our neighborhood precinct at 8:00:05 p.m., just after NBC announced they couldn't project a winner in the presidential race until the polls closed on the west coast at 8:00 PST. At 10 seconds to 8, the anchor started the 10-9-8-7 countdown and all the pollworkers--plus Uzi, Maya, Eden, the neighbors who so graciously offer up their garage as a polling station every year, and whatever other friends were there--did the countdown with him. At exactly 8:00, the network called the race for Obama and we all started screaming, hugging, and literally crying with happiness and relief.
For me, it wasn't even so much that Obama won--though of course that was what I was hoping for--but that we'd had a fair election, and the democratic process in this country has been restored. After too many weeks of hearing about Joe the Plumber, it's Joe the Voter who prevailed.
The photo at top was taken at about 7 p.m. If we look tired, it's because we'd been there since the 6 a.m. set up with only an hour off for staggered lunch breaks. Because we're in such a remote neighborhood, we only had about 300 people on our rolls, and 70 of them had voted by mail, but we still had a good number of voters coming through. A couple of them were 18-21 and very proud to be voting for the first time. A few who showed up weren't on our rolls and had to do provisional ballots, which worried me a little since their votes weren't included in the count that night, and we had a number of important propositions on the ballot. (Like Prop 8, which lost.) We had a big rush in the morning before work and school, a smaller one after school let out, and another one at about 6:30. We couldn't listen to any election results while people were voting, so we'd turn on the radio during the downtimes. Nothing was happening--a few allegations of ballot machine problems and news about long lines, but nothing more--until about 7 p.m. PST, when Vermont was called for Obama and Kentucky and Georgia for McCain. Then results started coming in at a faster clip. I'd say our polling station was about 55 percent registered Democrats, 20 percent Republicans, 20 percent Independents or no party affiliation, and a couple of , and a couple of Libertarians and Green Party hopefuls. I'm guessing the ballots were about 75 percent Obama, 20 percent McCain. That's our liberal mountain town, for you. Two people wrote in "President Hillary Clinton," which I thought was kind of sweet.
Anyway, it's a big sigh of relief at this end. And now I don't have any good reasons left for not finishing my book ASAP.