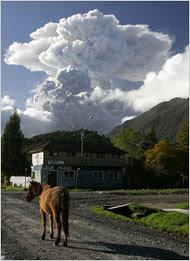 This past winter the girls and I were driving home from piano lessons in the midst of a terrible rainstorm. We were on Old Topanga Canyon Road, which is twisty and cringe-inducing even under the best weather conditions. I gripped the wheel tight with both hands and asked the girls to hold off on any questions or requests for a while so I could concentrate on the road. "These are the worst road conditions I've ever seen in Topanga," I told them--which is saying a lot. Then a little voice popped up from the booster seat behind me, "At least a volcano isn't erupting!"
That's Eden, always looking on the bright side.
It's a family joke now. No matter how grim things may look at any moment, one of us will chime in with, "At least a volcano isn't erupting!"
And now, what do you know? In Chile, a volcano actually IS erupting. Eden, who's obsessed with weather--her favorite books are a series of science titles like "Thunderstorms," "Hurricanes" and "Volcanoes"--is amazed. Still, it's not looking great for the residents of Chaiten, Chile--8000 of whom have been evacuated. That's more than the number who had to evacuate Malibu and parts of Topanga last October during the firestorms. Oddly, the photos coming from Chile of the clouds of ash look a lot like the plumes of smoke we saw pouring out of Malibu last year. As we were evacuating via Calabasas we turned around and saw a truly apocalyptic cloud of gray and white smoke rising from the mountains behind us. I supposed we could have comforted ourselves by reaffirming that at least a volcano wasn't erupting...but Chileans don't have that reassurance now. Nor would it do much for all the citizens of Myanmar recovering from the devastation and loss from the cyclone. During a week like this one, I'm trying to be mindful about reminding the girls to be thankful for every boring day.