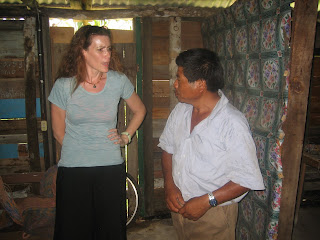 Returned from Belize last Tuesday morning, and it’s been a catch-up race ever since. It wasn’t easy to blog or email from there, since email access was very limited and often very slow. That turned out to be a blessing, in its own way, since without internet, computers, or cell phones I was—gasp—actually forced to interact with people on a constant basis and spend time with my own thoughts. Which turned out to be one of the many highlights of the trip.

So. Belize! It was eleven days total, all of it spent in the Cayo District in the western part of the country. The first seven days were a workshop with Dr. Rosita Arvigo, learning about Mayan spiritual healing and the unique power of plants for spiritual and medicinal work. Rosita studied for many years with Don Elijio Panti, one of Belize’s most famous shamans, and her wealth of knowledge is extensive. She’s a generous and brilliant and funny teacher. There were about 25 or 26 students there for the week, and I don’t think I’ve ever met such a beautiful group of people before. For me, coming from LA, it was a big and nervous stretch to walk up to strangers, stick out my hand, and say, “Hi, I’m Hope,” but once I got over that hurdle I found myself in the company of 26 interesting, hilarious women and men (mostly women—there were only 3 men among us, like a creative writing workshop) who by the end of the week felt like more than friends. Cousins, maybe, or even reunited siblings.

We stayed in the River Camp section of Chaa Creek resort, sort of like a low-tech summer camp environment with bunks for two and four, that’s often used by large groups. My roommate, Michele, was a physical therapist and yoga instructor from Colorado and we would stay up late at night talking. I haven’t had a roommate since…well, since college, I think, and this was another highlight of the trip. Every morning we would all walk about a mile through the rainforest along the river, then across the Chaa Creek property, then through another patch of jungle past the Natural History Center and Butterfly Farm, then up a hill to Rosita’s house for class. On Tuesday we had an excursion day where we all canoed down the Macal River to the town of San Ignacio, walked around and did some souvenir shopping, had lunch in the village of San Jose de Succotz with Dona Juana, a traditional Mayan healer, and then toured the Mayan ruins at Xunantunich. Afterward we stopped at the Ix Chel Wellness Center, where Rosita and her husband Greg run a massage school and also where her Rainforest Remedies products are manufactured. I came back with a small stash of tinctures for stomach upsets, the flu, anxiety, and back aches that work better than any pharmaceuticals I’ve ever come across. She also has terrific insect repellant and a salve for insect bites and all kinds of rashes. Everything is made from leaves, bark, and other natural products found in Belize. You can find these items—and others, including Rosita’s books—at arvigomassage.com/rainforest_remedies/rr_products.phtml

The day after the workshop, I went back to San Antonio Village with Heidi and Seth (friends from the class) and a guide and translator (Docio, who was the supervisor of the river camp). San Antonio is where we started our journey with Maya in 2000, when we brought her to a Mayan bush doctor, and I was hoping to find him again. Docio, who has relatives in San Antonio, thought he’d located him for me. The man he brought us to looked different than I remembered. I had a photo of his house from 2000 but even though he brought us to what he said was that structure, it had been moved to a different part of his land and boarded up when he built a new house, so nothing looked familiar to me. But then he brought us inside the house, which he now uses for drying herbs. (That's a photo of us above.) I told him I remembered a handwritten letter on the wall introducing himself as a Mayan healer and he lifted a piece of paper on the far right wall and underneath it was a clipboard with the sign I remembered. Then he asked if the woman had brought the medicine back for us, so he remembered us. A few years ago, Uzi’s assistant at work—who’s Belizean—went home for a holiday and brought back some additional cough rub for us from him, and he remembered giving it to her. So we’d definitely found our man.

I spoke with him about Eden's psoriasis, and he offered to pick some leaves to give her in a tea and a bath. The next afternoon when I was leaving the local market in San Ignacio he found me in town and gave me a big bag of leaves. We rode the local bus back together—me to Cristo Rey, my next stop, and him all the way to San Antonio. It was market day, so the bus stopped about every 50 feet at individual houses to let women off with their purchases. The driver got out at every stop and opened the back of the bus to carry each family’s box of food to each curb. Riding the bus with Ovencio was definitely a demystifying process. For seven years I’ve thought of him as the mystical Mayan bush doctor who grew to mythic stature in my mind, and then we’re sitting together on an old school bus on a bumpy dirt road looking at a bag of leaves.

As a side note, bringing a bag of leaves into the U.S. from Central America isn’t as straightforward as it sounds. In other words, you can’t do it. You can, however, boil a pot of water, steep the leaves in it for about ten minutes to make a tea, strain the water, and let it cool, then pour it into plastic water bottles, tape them shut, wrap them up tightly in plastic, and bury them between clothes in your duffle bag. After I got home, Eden drank one cup of tea for three days in a row and we’ve bathed her nine times. So far her skin is doing really well.

One of the two leaves Ovencio gave me is known in Belize as Ix Canan (the Mayan name) or Santa Maria (the Spanish name). In the US apparently it can grow in Florida, Texas and California and is called either Scarlet Bush, Texas Firecracker, or Polly Redhead. My local nursery, which is a pretty comprehensive one, doesn't carry it and never heard of it, so I'm on a mission to find seeds or a seedling so we can grow it here. If anyone has any ideas, please let me know.

Back to the recap...

For the final three days of the trip, I stayed at Crystal Paradise resort in Cristo Rey, where we stayed seven years ago. It’s family owned, and I became reacquainted with some of the people who’d helped us in 2000. On Sunday, my last day, I’d done pretty much everything I’d set out to do on the trip, so I figured I’d join whatever excursion that day had an extra seat in the van. It turned out to be a trip over to Tikal, in Guatemala, a trek we’d also made seven years ago. I wasn’t planning to include a Tikal chapter in the book, but while making the drive and touring the Mayan ruins, and remembering things that had happened there, I realized it would make a good chapter. So that was a little bit of kismet at work there. A big highlight of this part of the trip was meeting Hugo, our driver. He didn’t speak much English and for 90 minutes from the border to Tikal, and 90 minutes back, I got the best Spanish refresher lesson of my life. Until then, I was very shy about speaking Spanish because I don’t like to speak poorly, but after just the first half hour an incredible amount of vocabulary and sentence structure started coming back. It’s inspired me to take some more classes. Of course, there’s the pesky problem of Hebrew words popping up sometimes if I can’t remember the Spanish one, but speaking two languages halfway doesn’t really make sense. I’d rather make strides with one of them—the more useful one in most parts of LA.

Hugo and his wife recently worked for CBS when they were filming "Survivor" on an island in the middle of a lake in the Peten region of Guatemala--Hugo as a driver, and his wife helping out with the laundry. He entertained all nine of us in the van with stories of how CBS took over with their base camp and film crews, and what happened to all the Americans immediately after they were voted off the show.

The next day, at the airport on the way home, I ran into three women from my workshop and we had a small mini-reunion. Everyone is spread out across the U.S., but I’m certain we’ll find ways to see each other again. Already, when we all go back down to Belize on Friday, I’ll get to see two, maybe three, of the women from the workshop who live in Belize. I was hoping to bring Uzi, Maya, and Eden back to Cayo but the hotel at the beach which we had to pre-pay doesn’t want to refund any of the nights, even with one week’s notice, so that’s complicating things. We’ll most likely stay on Ambergris Caye, the biggest of Belize’s islands, for the whole week. I know, I know…poor us. But I do feel as if a piece of my heart is tugging me back to the western part of the country, and I think another trip there before the end of the year is in order, if I can possibly make it work.